Russian cosmonaut Ivan Vagner, while aboard the International Space Station (ISS), tweeted a time-lapse video that captured the aurora over Antarctica. In addition to the Northern Lights, one can see five unidentified luminous objects in the video.

Judging by the video, the objects were moving in a parallel course. The cosmonaut could not identify their nature. He specified that the frames for the time-lapse video were shot at a rate of 1 frame per second, and then were collected in a video of 25 frames per second. Thus, in reality, the unidentified objects were visible for almost a minute. The information about the objects was transferred to Russian Federal Space Agency Roscosmos for analysis.

The unidentified objects captured by the Russian cosmonaut from the ISS could be space debris or Starlink satellites, experts and scientists of the Russian Academy of Sciences believe.

According to Lev Zelyony, the scientific director of the Space Research Institute of the Russian Academy of Sciences, the captured objects are likely to be communication satellites launched by Elon Musk's SpaceX.

However, the objects appeared and disappeared quickly.

"There is also an explanation for this. We see them when they reflect sunlight. The reflection does not last long." he said.

Space industry expert Ivan Moiseev suggested that the objects could also be parts of the debris from the ISS.

"Passing satellites and their debris fly by the ISS at a speed that makes it impossible to notice them. Yet, elements that separate from the ISS, for example, pieces of vacuum shell, can be easily noticed," he said.

ufo iss ufo antarctica ufo sighting russian cosmonauts international space station
20:33
Coronavirus pandemic causes unprecedented economic decline since WWII
20:02
Russian nationalist Maxim Tesak found dead in detention centre
16:49
A (new) role for Italy in the Mediterranean?
22:57
Kyrgyzstan wants to join Russia to give rise to the new USSR
21:15
Roscosmos calls Venus 'Russian planet' with 'living hell' on it
22:17
Lukashenko and Putin reaffirm 20 years of their friendship
20:58
The West should sit on its backside, shut up, and listen to 'the others'
19:16
2020: Humankind fails the test
16:35
Putin supports Lukashenko and gives him $1.5 billion
13:10
America's injustice system (updated)
Europe
A (new) role for Italy in the Mediterranean? 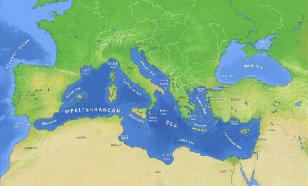